A tremendous giant stollen, a colorful parade, a likeable patroness and hundreds of proud bakers and pastry makers: These are the ingredients for the pre-Christmas highlight of the Saxon capital - the Dresdner Stollenfest. Since 1994 the members of the Stollen Association dedicate their Dresdner Christstollen its own festival. Along tens of thousands of guests from all over the world they celebrate their centuries-old baking tradition, the vibrant craft and especially the truly unique Christmas delicacy on the Saturday before the second Advent.

Join us for this unique experience in front of the breathtaking scenery of Dresden: the Dresdner Stollenfest - this year on December 5th, 2020! 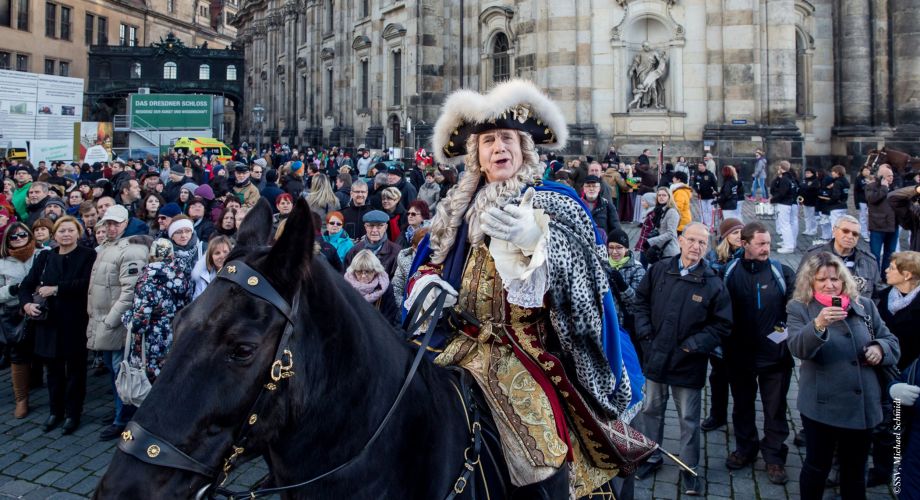 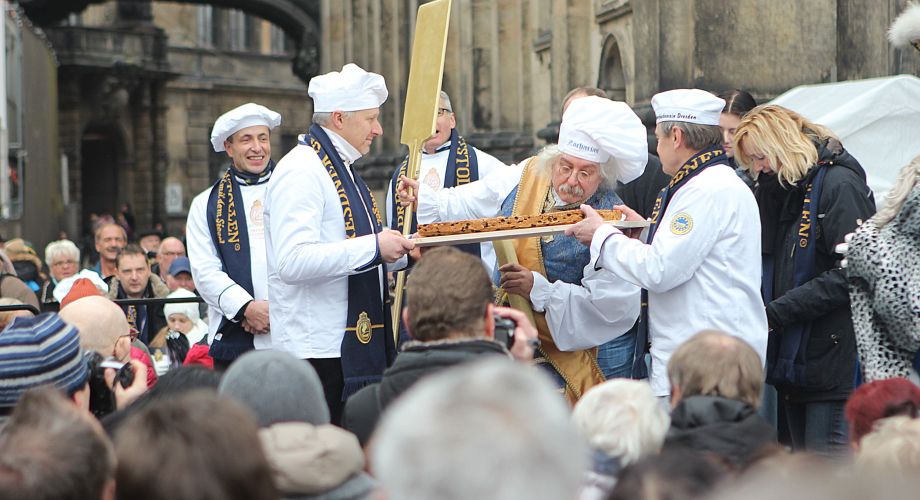 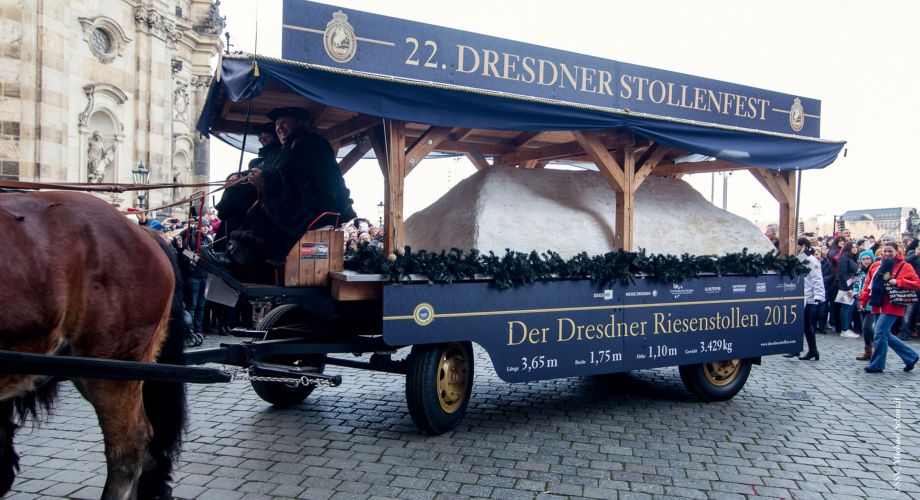 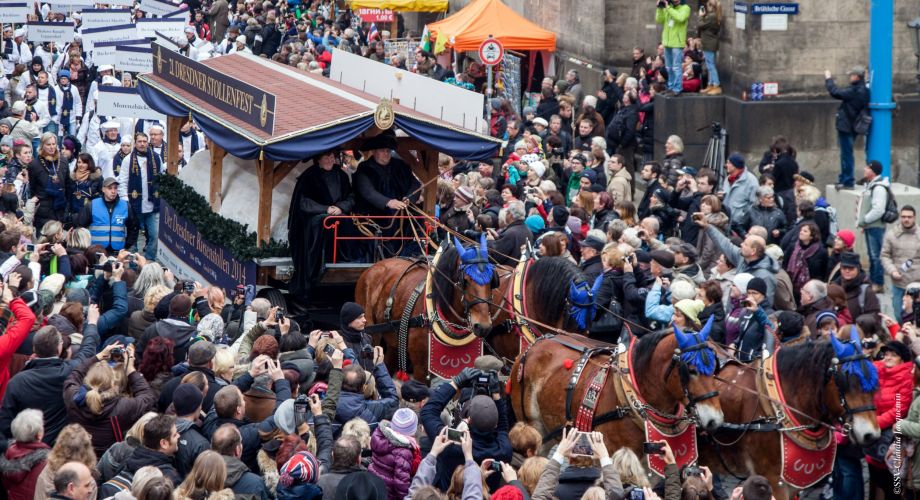 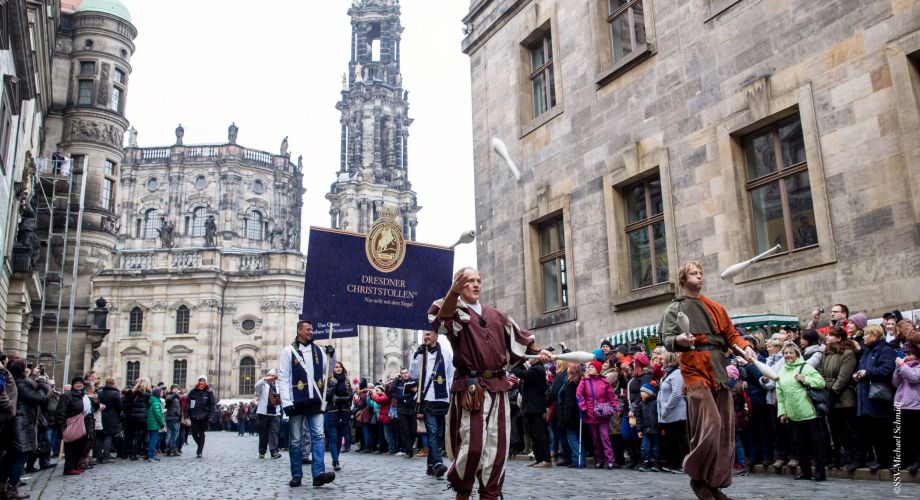 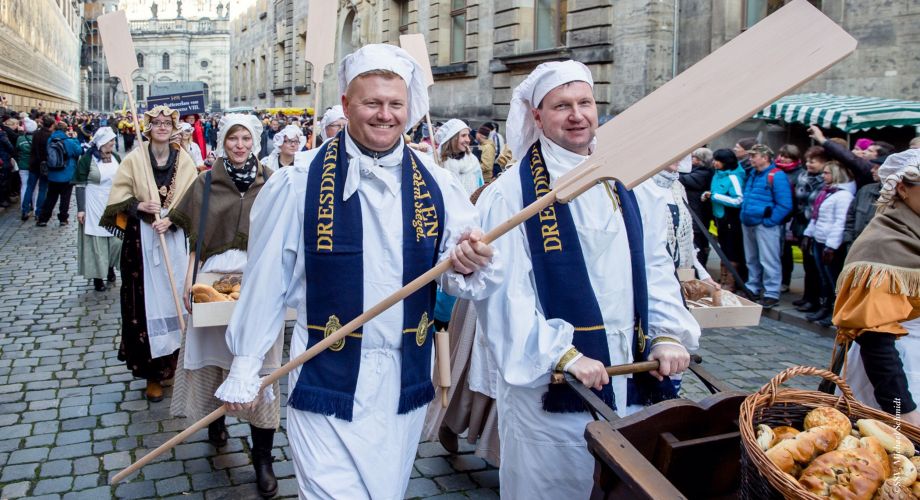 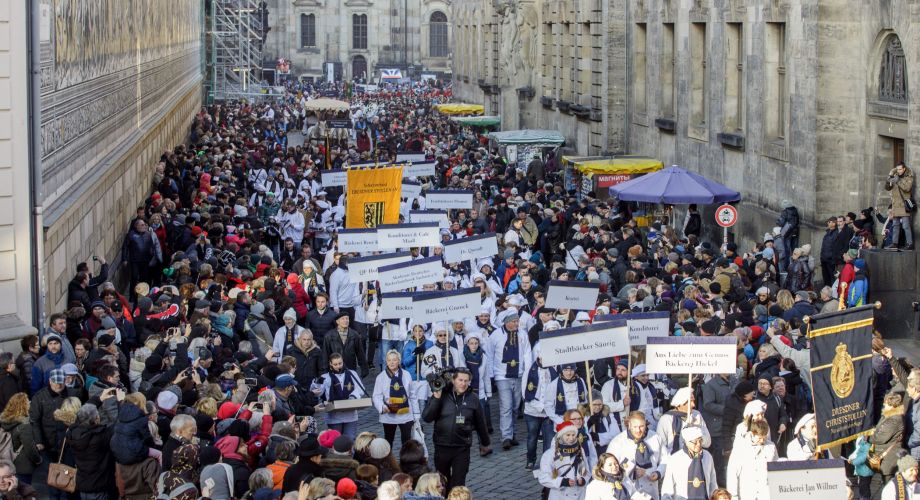 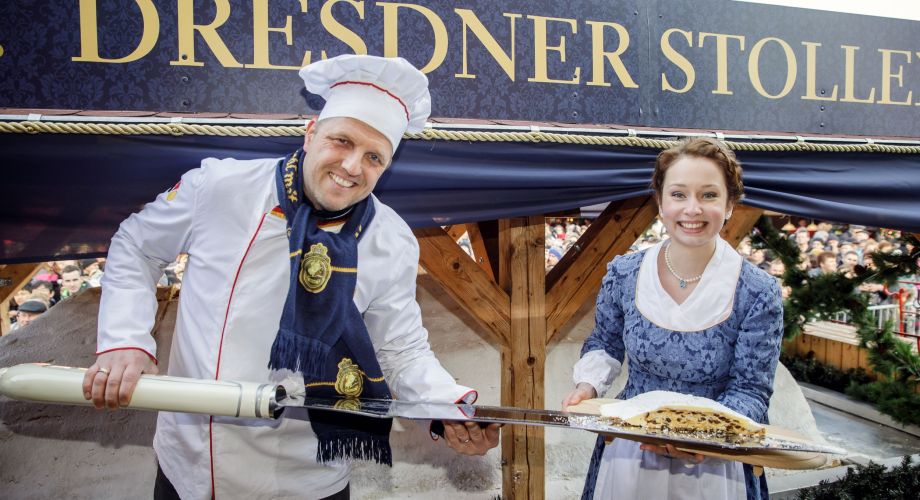 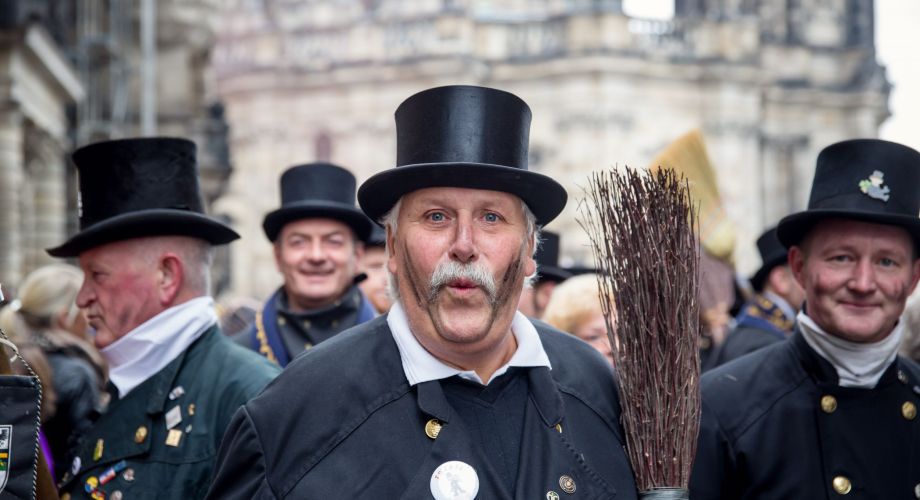 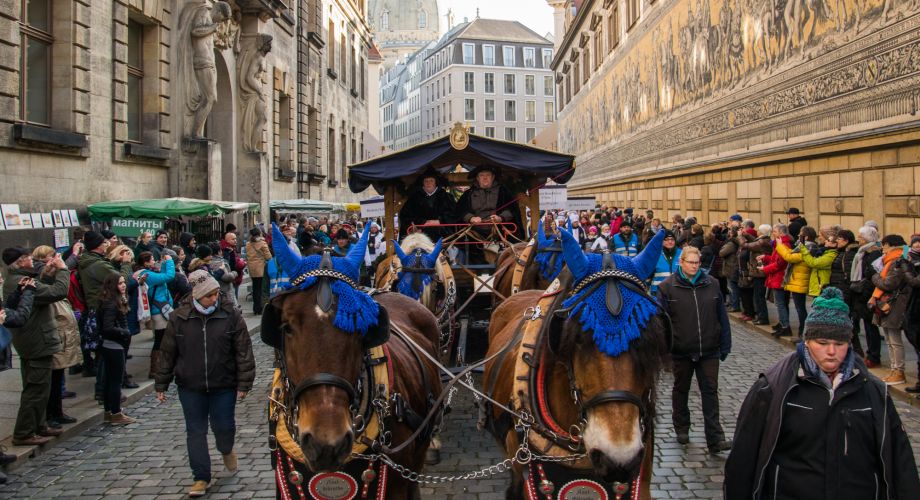 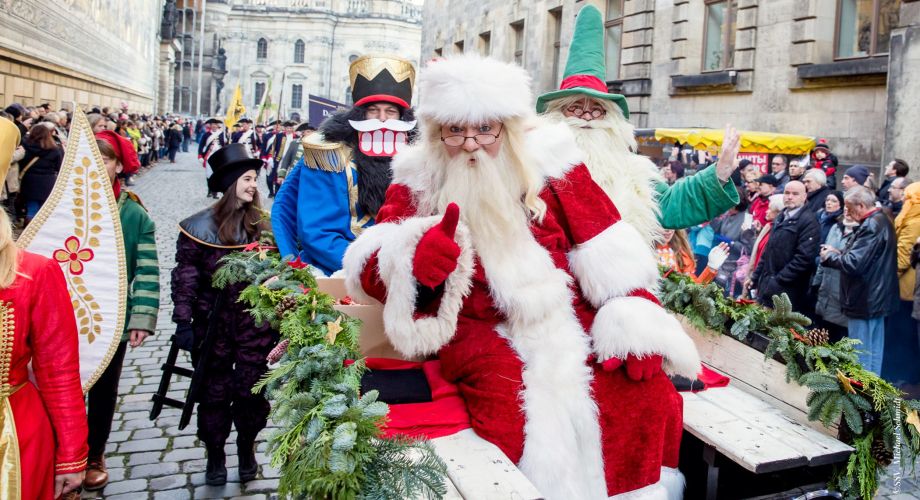 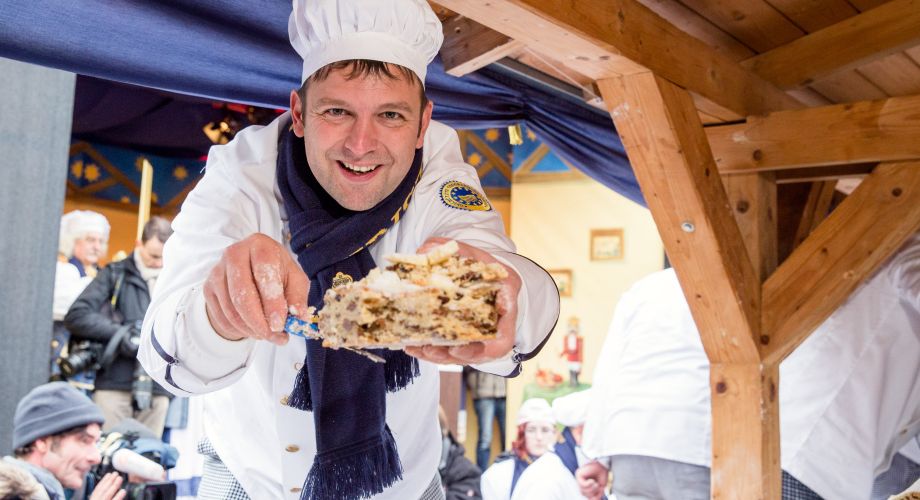 Enjoy for a Good Cause

The giant stollen will be cut and sold at the Striezelmarkt. A piece of 500 grams costs six Euros. Dresden's stollen bakers traditionally donate a majority of the revenues to a good cause.

How to Bake a Giant Stollen

The star of the Stollenfest is without a doubt the super heavy giant stollen that is shown off during the Dresdner Stollenfest by the bakers and pastry makers. But how does one bake a giant stollen? Definitely not in one piece like elector Augustus the Strong used to do during his time. Today, the giant stollen reaches his size through stacking. 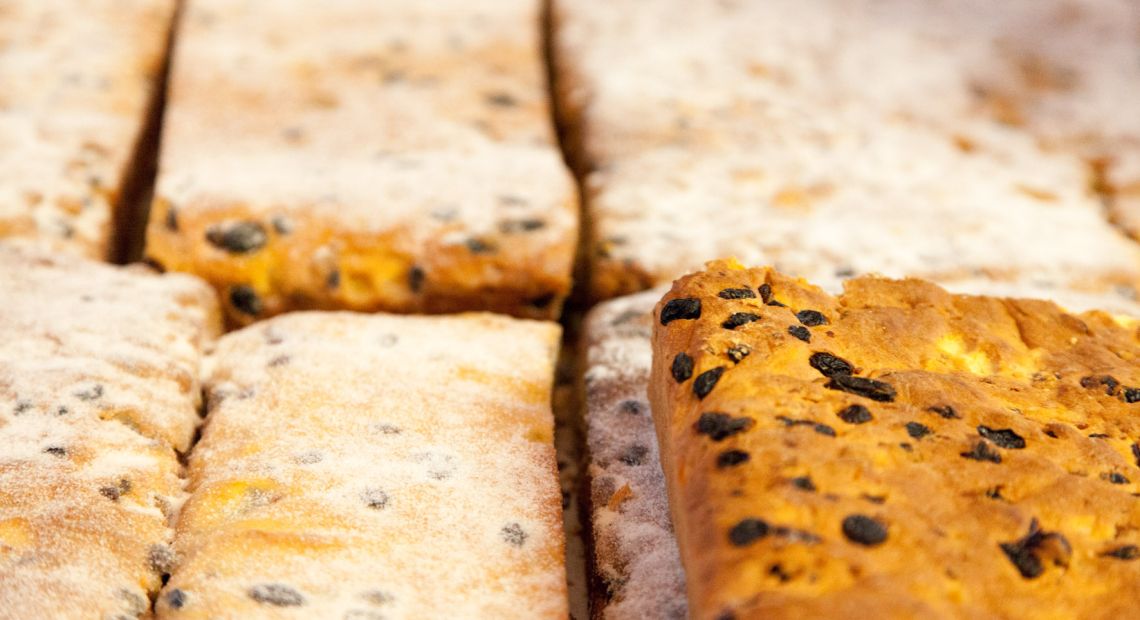 Warm, liquid butter and sugar are used for a sweet binding 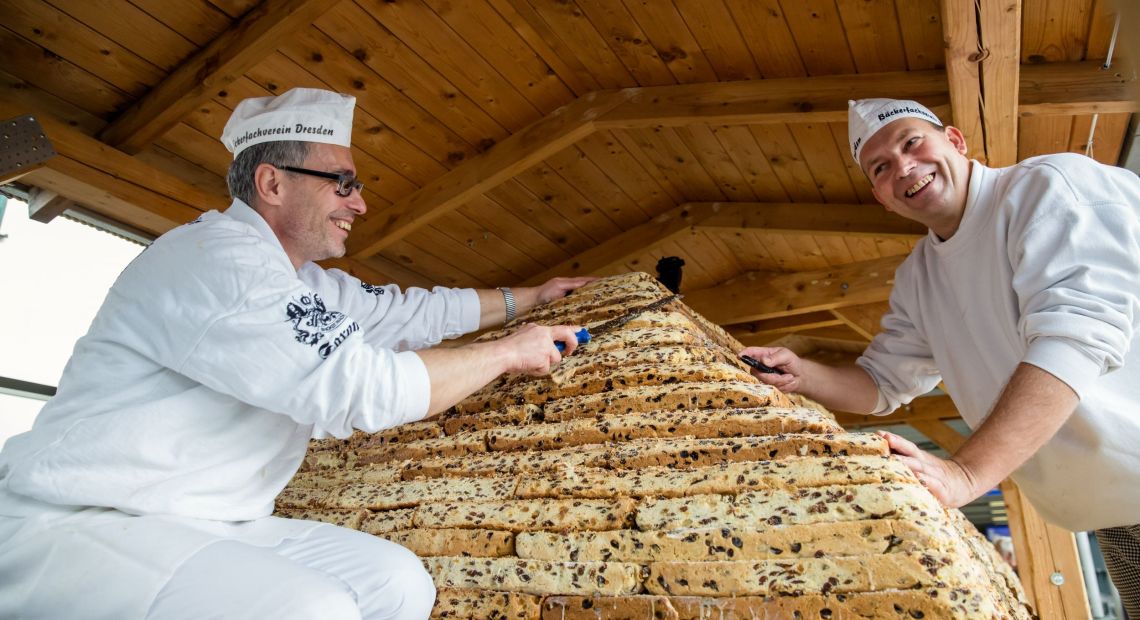 Then the giant is shaped ...

and eventually "plastered" with a rich mass of butter and sugar.

And ready is the giant stollen. The heaviest stollen yet was baked in 2013 weighing 4,246 kilos.

Baroque Origin - The History of the Stollenfest

The Zwinger Palace, the Hofkirche church and Moritzburg Castle: without Augustus the Strong (Elector of Saxony and King of Poland), the federal state of Saxony would be short of several sights. It certainly would be without the Dresdner Stollenfest today.

The Zeithain Encampment (Zeithainer Lustlager) - Origin of the Dresdner Stollenfest. To show off the strength of his military forces at the end of the Great Northern War, Frederick Augustus I invited the important nobility and military figures from all over Europe to a military display in the spring of 1730. The Zeithain Encampment, the biggest and most magnificent Baroque festival of all times, not only showed off his military power, it also showed his passion for record-breaking events. The highlight of the festival was a giant stollen weighing about 1,800 kilograms, which the prince elector commissioned for the encampment from one of Dresden's master bakers Johann Andreas Zacharias and 60 journeymen bakers.

Divided into 24,000 portions with the big Dresdner Stollen Knife, the 7 by 3 meter stollen was distributed among the festival guests and soldiers. A copperplate etching by the artist Elias Baeck still bears witness to this spectacle today, giving an idea of the challenges faced by the oven-builders under Matthäus Daniel Pöppelmann just to get Augustus's festive stollen baked.

Today, this festival is considered the origin of the Dresdner Stollenfest. In the beginning of the 1990s, the art and culture expert Dr. Peter Mutscheller researched old, forgotten craft traditions for the Hommage Dresden GmbH. During his research at the city's Kupferstichkabinett collections, he discovered this relic of the Baroque banquet. The idea for the Dresdner Stollenfest was born.

Almost 264 years after the Zeithain Encampment, in 1994, a Dresdner Christstollen that weighed 1,800 kilos was baked once again and presented to the public – although this time it was not in Zeithain but right in Dresden's Old Town.

Since the very first Stollenfest, thousands of Dresden's residents and visitors have celebrated the traditional delicacy. Today, more than 20 years later, the festival is considered a highlight of the pre-Christmas period in Dresden. 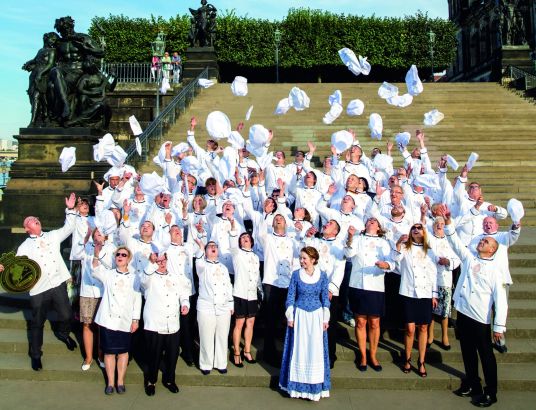 The Stollen Association, called »Schutzverband Dresdner Stollen e.V.«, represents the interests of the stollen bakeries and pastry shops from Dresden and its surrounding areas. 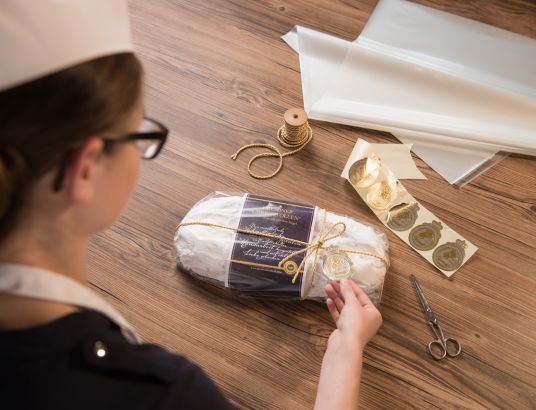 The golden seal guarantees that the stollen complies with the certified constant and high quality that is demanded of every Dresdner Christstollen. 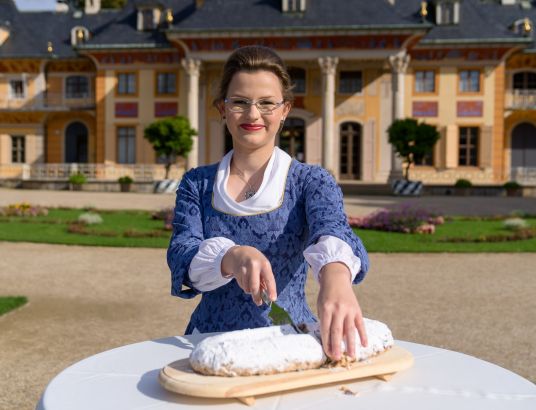 The representative of a centuries-old tradition. The Dresdner Stollenmädchen represents Saxony’s most famous Christmas pastry. 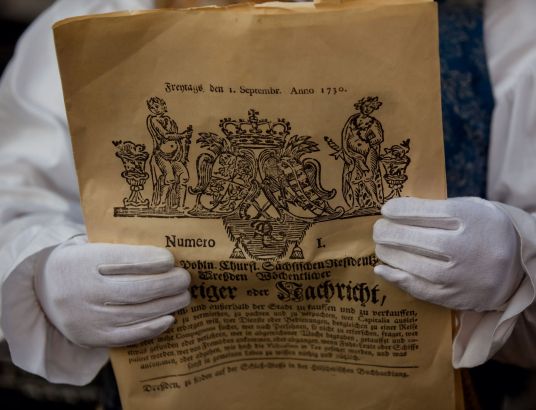 All news and highlights of the Dresdner Christstollen and Dresden's stollen bakeries. 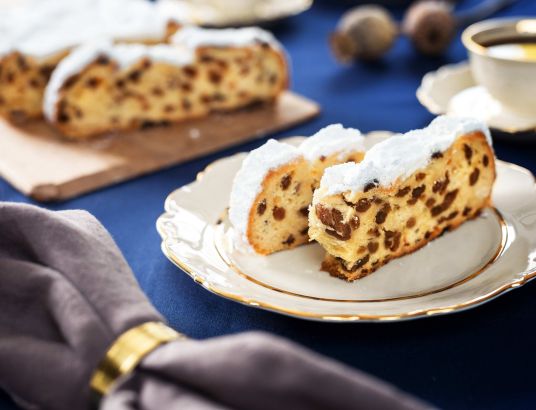 A traditional pastry made with excellence, craftsmanship, passion, history and culture. 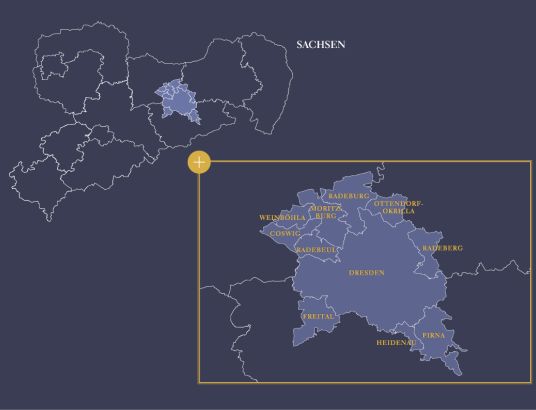 The Stollen Association counts members from Dresden and its close surrounding areas.